Create an unforgettable event with a Texas size experience.

At the Dallas Zoo, we don't just plan events, we create experiences! The Dallas Zoo is the largest zoo in Texas spanning over 106 acres of "wild" experiences complete with full event planning service professionals and a team of culinary experts. Treat your guests to unique animal experiences such as giraffe feedings or up-close and personal animal interactions. Whether it’s a meeting for 15 or a dinner for 8,000 guests, we look forward to creating a custom and unforgettable event while supporting our vision of creating a better world for animals.

Whether it’s an intimate executive meeting, employee appreciation event or an elaborate holiday party the Dallas Zoo has the facilities to meet all of your needs.

The Dallas Zoo is a one of a kind alternative to the traditional wedding venue and provides a unique experience you for your guests.

Our event managers are excited to work with you on aligning your vision and budget to create a successful event at the Dallas Zoo. 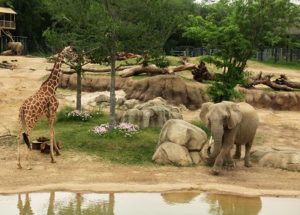 Our Giants of the Savanna is the only multi-species zoo exhibit in the United States to mix elephants and other species in the same habitat. It was named a top 10 zoo exhibit by USA Today. https://www.10best.com/awards/travel/best-zoo-2019/

The Dallas Zoo began in 1888 with just two deer and two mountain lions in City Park. It later moved to Fair Park in 1909 and quickly outgrew its second home, moving to Marsalis Park in 1912, where it stands today. Throughout the past 129 years, numerous upgrades have been made and collections expanded. In 1955, the Dallas Zoological Society was established as a non-profit to support the Zoo. In 2009, a public-private partnership transitioned the Zoo to private management. Today, the Dallas Zoo is home to more than 2,000 animals, and is thriving with new exhibits such as the Giants of the Savanna, Wonders of the Wild, presented by the Kimberly-Clark Corporation. In spring 2017, the Simmons Hippo Outpost opened, returning these remarkable “river horses” to the Zoo for the first time in 15 years.